With a visionary idea, the company was founded in 2007 by brothers Stephan and Rudolf Holzleitner &nbspand Roland Golger. 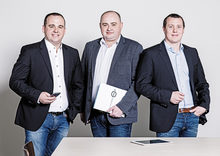 They moved from Wels to Krenglbach!

In October&nbsp 2016, the company moved to Wallerer Straße in Wels. A strategically clever move!

In 2017&nbsp, they exceeded 1000 employees for the first time. A highlight in the young company history.

In 2017, the company celebrated its 10th anniversary.

The leasing company quadrupled its workforce in five years and made it into the "top five" in municipal taxes.

The personnel service provider HOGO benefits from the good economic situation like hardly any other company in Wels. In October 2016, the entire group moved from Krenglbach to Wels. For the trade fair city, the change paid off.

The leasing company currently employs 1400 people and has become the fifth largest taxpayer in Wels. "The location was very important for us strategically," says Rudolf Holzleitner. He manages the business together with Roland Golger and Stephan Holzleitner. Three factors would have fuelled growth at HOGO: "The upswing in the economy, the new, larger company building including better accessibility and the network of the Wels business community," Stephan Holzleitner lists.

In 2017, sales climbed to 32 million euros. This year, the company is aiming for the 50 million mark. Mayor Andreas Rabl (FP) congratulates the up-and-coming company: "The city is happy that the HOGO company relocated to Wels two years ago. The company is not only a great employer, but also supports many Wels sports clubs with sponsorship money."

According to Managing Director Golger, well over 100,000 euros goes towards Wels sports every year. In addition to the Regionalliga club WSC-Hertha, the Police Sports Club, the ESV Tennis Section and the Wels Huskies (American football) also benefit from funds from the Wels HOGO headquarters. The company intends to continue growing and plans to open new branches in the coming years.

As a "visible sign" of this partnership, the club name has now changed to WSC HOGO Hertha. In addition, the traditional Mauth Stadium will be renamed the HOGO Arena.

"The framework conditions for a successful sporty future are given thereby", explains WSC HOGO Hertha President Wolfgang Nöstlinger, and Club Chairman and HOGO Managing Director Roland Golger adds: "We use this commitment to sustainably promote awareness of our company. In addition, working with youth and young talent is particularly close to our hearts".

Photo:
The HOGO Managing Directors Stephan and Rudolf Holzleitner and Roland Golger (pictured 1st, 3rd and 4th from left to right) seal the partnership together with Club President Wolfgang Nöstlinger (2nd from left). 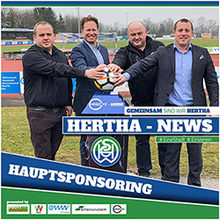 On September 1, 2019, two new locations were opened in Ansfelden (Upper Austria) and Vienna. 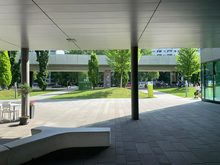 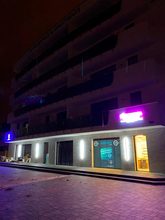